Am I seeing this right? *rubs eyes* Whoah! Big Pharma actually admits (albeit in very fine print) that vaccines cause autism?

The following adverse reactions have been identified during postapproval use of FluMist. [Translation: Our clinical trials involved too few people for too short a time to catch these extremely serious adverse effects because we wanted to rush this product through approval by our shareholders esteemed colleagues at the FDA in a mere six months instead of the standard ten years—testing be damned—so you paid to be our guinea pigs – more money for us, mwahaha!]

Because these reactions are reported voluntarily from a population of uncertain size, it is not always possible to reliably estimate their frequency or establish a causal relationship to vaccine exposure. [Since it happened outside our controlled setting, you can’t legally stick it on us, nyah nyah!]

What is mitochondrial encephalomyopathy and what’s it got to do with autism?

What is a mitochondrial disorder?

Mitochondria are the energy generators inside our cells. 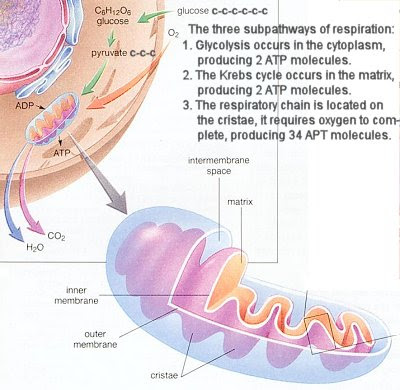 Mitochondria are responsible for processing oxygen and converting food into energy for essential cell functions.

The process of converting food and oxygen into energy requires hundreds of chemical reactions, and each chemical reaction must run almost perfectly in order to have a continuous supply of energy. When one or more components of these chemical reactions does not run perfectly, there is an energy crisis, and the cells cannot function normally. As a result, the incompletely burned food might accumulate as poison inside the body.
This poison can stop other chemical reactions that are important for the cells to survive, making the energy crisis even worse. In addition, these poisons can act as free radicals (reactive substances that readily form harmful compounds with other molecules) that can damage the mitochondria over time, causing damage that cannot be reversed.

About 1 in 4,000 children in the United States will develop mitochondrial disease by the age of 10.

As for encephalomyopathy, encephalo means brain and myopathy means degeneration.

So mitochondrial encephalomyopathy means the malfunction of mitochondria leading to the degeneration of the brain. (Better to just get the flu, no?)

Mitochondrial encephalomyopathy is listed as a side effect of the FluMist vaccine. So the maker of FluMist admits that FluMist contains toxins potent enough to permanently damage your mitochondria, leading to the death of brain cells. In short, FluMist causes brain damage. If you know how Big Pharma works, you know that for them to admit anything this serious means that they can no longer get away with laughing it off or calling you a conspiracy theorist. They printed it in their own insert!

Now, what’s interesting is that they even specified the specific type of mitochondrial disease that it causes exacerbates — Leigh Syndrome.

What is Leigh Syndrome?

Leigh Syndrome is a rare inherited neurometabolic disorder characterised by degeneration of the brain, meaning that it gradually loses its ability to function properly.

Leigh Syndrome usually occurs between the ages of three months and two years. The disorder worsens rapidly; the first signs may be loss of head control, poor sucking ability, and loss of previously acquired motor skills, meaning the control of particular groups of muscles. Loss of appetite, vomiting, seizures, irritability, and/or continuous crying may accompany these symptoms. As the disorder becomes worse, other symptoms such as heart problems, lack of muscle tone (hypotonia), and generalized weakness may develop, as well as lactic acidosis, a condition by which the body produces too much lactic acid. In rare cases, Leigh Syndrome may begin late in adolescence or early adulthood, and in these cases, the progression of the disease is slower than the classical form.

If you are a parent of a child with autism, you might be forgiven for thinking you were looking at the symptoms of autism. Here’s a comparison: 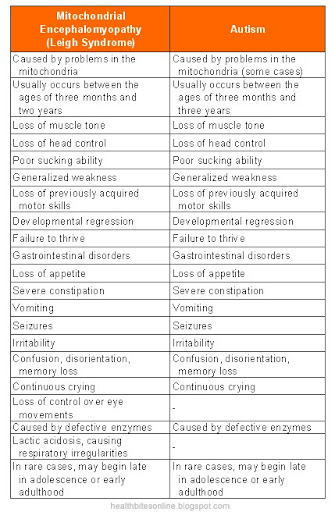 So, what has mitochondrial damage got to do with autism?

Hannah Poling (below) made medical history in 2008 when the US Vaccine Court ruled that her regression into full-blown autism was caused by vaccines.

What happened to little, red-haired Hannah Poling is hardly unique in the world of autism. She had an uneventful birth; she seemed to be developing normally—smiling, babbling, engaging in imaginative play, speaking about 20 words by 19 months. And then, right after receiving a bunch of vaccines, she fell ill and it all stopped. “Something happened after the vaccines,” says her mom, Terry Poling, who is a registered nurse and an attorney. “She just deteriorated and never came back.”

A panel of medical evaluators at the Department of Health and Human Services concluded that Hannah had been injured by vaccines — and recommended that her family be compensated for the injuries. The panel said that Hannah had an underlying cellular disorder that was aggravated by the vaccines, causing brain damage with features of autism spectrum disorder.

The case also thrusts the family into a national spotlight in the controversial public debate over whether vaccines have played some role in the growing number of U.S. children diagnosed with autism. Of particular concern to some families is the mercury-based preservative thimerosal, not used in child vaccines (except for some flu shots) since 2001.

The family turned to leading experts in neurology. “I had to know. My daughter didn’t just suddenly develop autism for no reason,” Terry Poling said.

Hannah’s father co-authored an article about her case, which was published in the Journal of Child Neurology in 2006.

Hannah’s case was one of three vaccine-court test cases alleging that thimerosal caused the children’s autism.

The government’s Division of Vaccine Injury Compensation concluded that five shots Hannah received in July 2000, when she was 19 months old, “significantly aggravated an underlying mitochondrial disorder” and resulted in a brain disorder “with features of autism spectrum disorder.”

“The biggest question right now for the public is: How unique is Hannah’s case?” said Jon Poling. Poling said he suspects there are other children like Hannah.

Indeed there are a whole lot more children like Hannah. A population study (2005) found that the incidence of mitochondrial disorders among autistic children is 7%. (So what caused autism in the other 93%?)

In a recent study (Apr 2010), researchers looked at a small group of children with both mitochondrial disease and autism. Here are some interesting things they found: 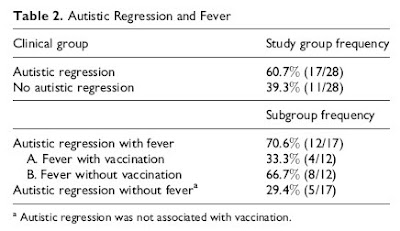 The frequency of autistic regression in the general population of patients with autism was estimated to be 25%.

[Regression is defined as a loss of developmental skills within 2 weeks after a fever.]

The rate of autistic regression in this highly selected group of individuals was approximately twice the rate of regression reported in the general population of patients with autistic spectrum disorder. Fever is associated with regression in patients with many types of mitochondrial diseases as well as in a broad array of other classes of metabolic disease. In no case did we observe regression with vaccination unless fever was present.

That is to say, children with mitochondrial diseases are more than twice as likely as normal children to get autism after a vaccination. 70% of them regressed after experiencing a high fever. Could the raging fever be an indication that their bodies could not fend off the simultaneous assault by multiple viruses and toxic vaccine components and suffered damage as a result?

What would be interesting to know is:

• What percentage of normal, healthy children developed a mitochondrial disorder as the result of getting vaccinated?

• Is it possible to have a mitochondrial disorder and not be autistic? Hannah Poling’s mother, Terry Poling, has the same genetic disorder, but she’s not autistic. Can we then conclude that if you have a mitochondrial disorder, you can live a normal and healthy life until the day you meet a vaccine you can’t handle? Is Terry Poling an anomaly, or are there many more adults like her? Remember that when Terry was a child, she got only a quarter of the number of vaccines that the American child of today gets. 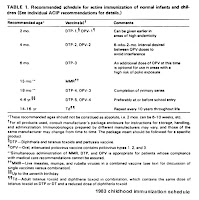 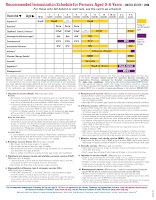 (See here for the latest vaccination schedule and also that of past years – scroll down a bit.)

Do you think that the pharmaceutical companies producing these vaccines would test their products this thoroughly before releasing them to the public? In the six months that it took them to produce and push the H1N1 vaccine through FDA approval? (Drugs normally go through 10 years of development and testing before getting FDA approval, and even then, the testing is bloody hell shoddy – I should know, I used to work in clinical trials!) Has any vaccine been tested this thoroughly? (If you’re wondering, the answer is no.) In 6 months, there is no time to test anything. I doubt there were even human trials since it usually takes more than 6 months just to get funding for the study! YOU are their guinea pigs. And if you don’t educate yourself, there is only one way to find out—the hard way.

Why do you suppose they don’t give a crap about your child’s safety? Because you can’t sue them, that’s why. They’re free of liability. You can sue the crib maker if their crib choked your baby, you can sue the cigarette company if their cigarettes gave you cancer, but you can’t sue vaccine makers if their vaccines harmed or killed your child. That’s because they have colluded with their friends in high places to change the law to protect themselves that way. Ask yourself – why the need to do that? Could it be because they knew they were making an extremely unsafe product in the first place? You don’t see car makers getting the government to change the law to exclude themselves from being sued, do you? Those people protecting their interests (not yours) are the very people you elected and pay. (Read Evidence of Harm, by David Kirby, a very well-researched and truly superlative book on how and why the US government allowed mercury to be added to your children’s vaccines.) Like you, I too thought that the FDA and CDC worked to protect us.

But I never thought I’d live to see the day when Big Pharma THEMSELVES ADMIT that if your child has a mitochondrial disorder, you’d best not vaccinate them unless you want to give them autism as well. And this is the sort of autism that is lifelong because damage to mitochondria is permanent. If your doctor calls you a nut or a conspiracy theorist, just ask him to read the insert.