Are criminal and civil penalties of hundreds of millions of dollars an important deterrent to law breaking by international drug companies?

Further, would external monitoring in the form of US government mandated corporate integrity agreements (CIA)1 to prevent recurrences of such illegal activities, lasting five years after being signed, be an additional deterrent? Yes in both cases, but only if the size of the penalties outweighed the companies’ gains while violating the laws and only if enforcement of the CIAs were effective. Unfortunately, neither is the case. This evaluation is based on the recent, sharp escalation in the frequency with which many giant multinational drug companies repeatedly engage in illegal criminal and civil activity after previously paying enormous fines and despite monitoring under CIAs. It seems that for some companies, commission of such criminal and civil violations has become part of their business models.

More than half of the total amounts of penalties were either for illegal promotion or illegally overcharging government programs for drugs. In the past three and a half years alone (2009 to mid-2012), criminal and civil penalties have totaled $18bn, well over half the total for the past 21 years. The largest growth has been for criminal penalties, leaping more than fivefold from $920m in 2005-8, to $5.1bn from 2009 to mid-2012, the latter comprising 76% of all criminal penalties paid since 1991. GlaxoSmithKline (GSK) topped the list of repeat offenders with total criminal and civil penalties of $7.56bn since 1991, comprised six different federal settlements and an additional number with states. Pfizer was the second highest with $2.96bn.2Overall, since 1991, 11 other companies also had criminal or civil settlements or both exceeding $50m on at least two occasio

An analysis of several of the repeat civil payments and criminal penalties by GSK and Pfizer based on publicly available government documents illustrates the failure of such large penalties and the parallel failure of the accompanying CIAs to curb such behavior.

In 2003, GSK paid $87m to the US federal government and states to settle allegations that the company violated the False Claims Act (submitting false claims to the government)—for underpaying rebates, effectively overcharging a government program (Medicaid), and signed a CIA, lasting until 2008, to “ensure that GSK will accurately reports its ‘best price’ information to the government in the future.”4

In 2005, slightly more than two years later, GSK paid an additional $150m, again to resolve allegations that it violated the False Claims Act “through fraudulent drug pricing and marketing of two antiemetic drugs, Zofran [ondansetron] and Kytril [granisetron],” and signed an amended CIA, extending until 2010.5

Then in 2010, a GSK subsidiary paid $150m in criminal penalties, and GSK agreed to pay $600m to resolve civil allegations, again involving alleged violations of the False Claims Act related to selling drugs that were adulterated. The government stated such “adulterated drugs undermine the integrity of the US Food and Drug Administration’s approval process, can introduce substandard or ineffective drugs on to the market and, in the worst cases, can potentially put patients’ health at risk.”6 It is not clear why, despite continuation of illegal activity while under a previous CIA, there was no new or amended CIA from 2010 until 2015.

However in 2012, GSK paid the government $3bn, in criminal penalties and to resolve allegations of civil violations, described by the government as the “Largest health care fraud settlement in US history.”7 Again, for at least the fourth time including 2003, there were also allegations of False Claims Act violations, amounting to $2bn to resolve civil liability for illegal off label promotion of several drugs, including allegations that “GSK paid kickbacks to health care professionals to induce them to promote and prescribe these [and other] drugs.”

But there was also a $1bn criminal penalty for withholding information from the US Food and Drug Administration about the risks of rosiglitazone (marketed as Avandia) and for introducing misbranded drugs into interstate commerce. Unlike in 2010, there was a CIA accompanying the $3bn 2012 criminal and civil payments. GSK will therefore have been under a series of CIAs from 2003 through 2018, with the exception of the 2010 to 2012 interval.

Then there is Pfizer. In 2002, the company paid $49m to settle allegations that it violated the False Claims Act. The government charged that Pfizer “fraudulently avoided paying fully the rebates owed to the state and federal governments under the national drug Medicaid Rebate program for the cholesterol lowering drug Lipitor [avorvastatin].” Pfizer signed a CIA which was to last until 2007.8 But in 2004, a Pfizer subsidiary paid $430m in criminal fines and other payments to settle allegations of civil violations, including False Claims Act violations, involving illegal off label marketing of gabapentin (Neurontin) and kickbacks. The government stated that “This illegal and fraudulent promotion scheme corrupted the information process relied upon by doctors in their medical decision making, thereby putting patients at risk.”9

In 2009, Pfizer and a subsidiary paid $2.3bn in criminal fines and payments to resolve allegations of civil violations for, among other offenses, illegal off label promotion of the painkiller valdecoxib (marketed as Bextra) and other drugs. The $1.3bn criminal penalty at the time was the largest ever against a drug company, and the $1bn civil settlement again involved alleged violations of the False Claims Act. Another CIA was signed that year, extending into 2014. The government stated that “Illegal conduct and fraud by pharmaceutical companies puts the public health at risk, corrupts medical decisions by health care providers, and costs the government billions of dollars.”10

Because of the repeat nature of Pfizer’s 2004 and 2009 criminal fines and civil settlement payments, we sought reports from the government documenting the degree of “compliance” with the 2004 CIA. After we filed a Freedom of Information Act request in 2009, the US government, in agreement with Pfizer, denied us access to many of the most important portions of these reports, claiming they were trade secret/confidential commercial information. In September, 2011, we filed suit in federal court against the government to obtain these documents. The litigation is continuing in Federal District Court in Washington, DC.11 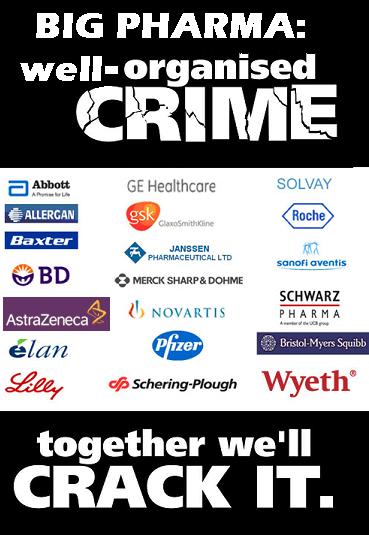 These escalating patterns of repeated criminal violations and civil settlements to resolve serious allegations of civil lawlessness hardly bespeak corporate integrity for GSK, Pfizer, or the many other companies who are also repeat offenders. We are forced to conclude that neither the current level of penalties nor corporate integrity agreements are effective and that there is a pathological lack of corporate integrity in many drug companies.