MB Comment: The Council on Foreign Relations (CFR) recently published a disease map purporting to show that disease outbreaks are the fault of the unvaccinated. Mainstream media like PBS jumped on this story like hyenas on a antelope. Only problem is – the CFR map shows the highest disease outbreaks in the most-vaccinated population! What a bunch of brainwashed vaccine robots. They can’t admit vaccine failure when their own disease map screams it.

Those countries where vaccines are given routinely or forced upon children and their parents, often under threat of law, experience the lion’s share of communicable diseases. Why? What’s happened with “herd immunity”?

Right off, and at the very beginning, I say this article will cause rumblings and a stir amongst many, if not all, on both sides of the vaccine safety issue, especially with vaccine apologists. My reason for saying that is because what I discuss is strictly my evaluation of the interactive data map showing communicable infectious diseases globally, as prepared by the Council on Foreign Relations (CFR), which points out some grave problems regarding vaccine statistics, in my opinion. Please study the map before reading on.

The only request I make is that every reader consider the information with an open mind, not one influenced or prejudiced by pseudo-science. One statistic that the data show is this: the most vaccinated population countries have the most outbreaks of those same diseases for which vaccines are pushed on populations supposedly to engender what’s called “herd immunity.”

First, let’s see how many vaccinations were mandated for children in several countries of the western meme according to data available in 2009. Sweden and Japan had 11 vaccines, Finland 12, Norway 13, Switzerland 16, Australia 27, Canada 28, and USA 36. It is safe to say that, if anything, more vaccines have been added to those schedules since 2009, especially the HPV vaccine for both girls and boys. But, for the sake of ‘argument’ and graphics available, I will use the chart below as a reference alongside the CFR’s map. 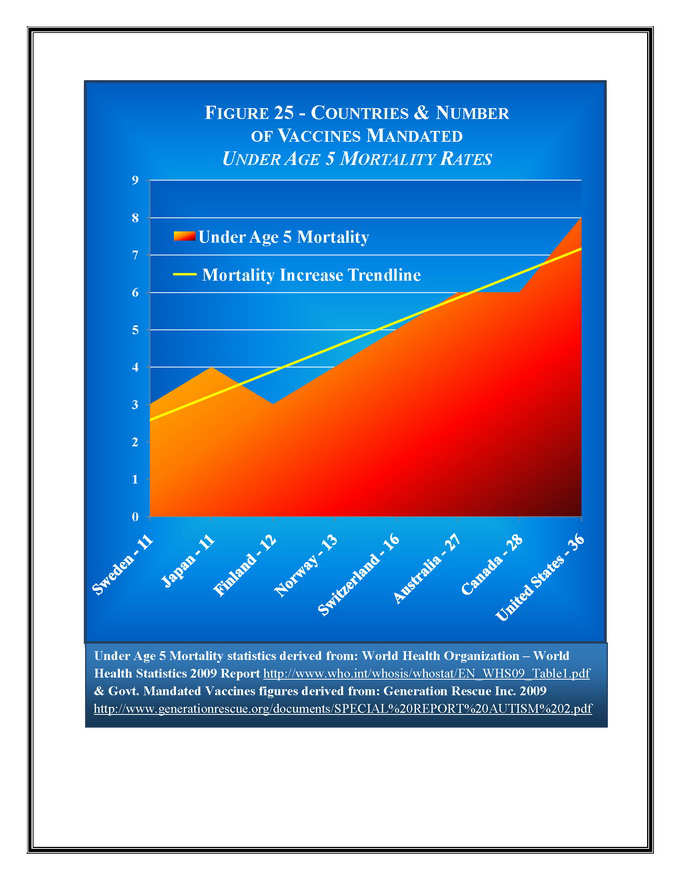 One readily can see that the USA had/has the most number of mandated vaccines, which has increased dramatically in numbers since 2009 for children birth to 18 years of age as confirmed by the CDC’s “Recommended Immunization Schedule for Persons Age 0 Through 18 Years United States, 2014.”

Before I go further in my interpretation of the map and data, let’s consider what the map offers:

Now, I’d like to discuss my interpretation of what the map represents:

Those countries where vaccines are given routinely or forced upon children and their parents, often under threat of law, experience the lion’s share of communicable diseases. Why? What’s happened with “herd immunity”? It just doesn’t add up, especially since in the USA there is over 90% childhood vaccination compliance! According to the U.S. CDC’s MMWR (Mortality and Morbidity Weekly Report) 2012—13 School Year for Kindergarten, for example,

Take a look at those vaccination percentage rates: 94.5% for MMR, 95.1% for DtaP and 93.8% for chickenpox (varicella), and still there are outbreaks of measles and pertussis. There IS something dramatically wrong with vaccines and their effectiveness, I contend, if that number of children is an example of vaccination rates in the USA that can be interpolated for comparisons of vaccinated versus non-vaccinated. Furthermore, only a medium total of 1.8% was exempt from vaccinations.

Question: Is 1.8% a high exemption level? I don’t think so, as it falls well within the 5% target range of exemptions for non-vaccinated as found in Healthy People 2020.

The CDC/FDA, medicine, pharmacology, and vaccinology, in particular, are dead wrong regarding vaccines, I do believe. The more children receive vaccines and boosters, undoubtedly, the more communicable infectious diseases are surfacing. What does the CFR map tell?

In my opinion, one of several physiological occurrences, or all, may be happening:

A.1. Vaccines aren’t working and cause immune dysfunction.

A.2. Vaccines are damaging the immune system so much that it cannot function as Nature intended and designed due to vaccine antigen responses that undoubtedly are reprogramming it.

A.3. Disease microorganisms are becoming sophisticated – similar to bacteria due to too many antibiotics prescribed for just about every malady plus those in the food chain – so that microorganisms are morphing into new strains for which vaccinology either hasn’t realized what’s going on or can’t keep up with various or newer strains and antigens. See this:

There are currently eight species in the Bordetella genus. Three species in this genus are known to be pathogenic to humans. B. pertussis and B. parapertussis are very similar species. Both species cause pertussis (whooping cough) in humans and are separated merely by the toxins they release during infection. B. parapertussis releases toxins that seem to cause a milder form of pertussis (whooping cough). B. bronchiseptica causes respiratory disease in various mammals and occasionally in humans. The species is further separated from B. pertussis and B. parapertussis by being motile. The human pathology of the remaining five species is relatively unknown. B. avium and B. hinzii, are known to cause respiratory disease in poultry. [2] [CJF emphasis added]

A.4. A large percentage of vaccinated children in the USA now experience some form of illness or disease that is NOT a communicable disease, which manifests either as chronic or neurological. Something authorities want to deny is that since numerous vaccines have been mandated for children since the 1980s, so have autism [neurological] rates skyrocketed from one in 10,000 [1970s] to 1 in 50 children in the USA as of March 2013 reporting! [1]

While writing this article I received this information:

The new ‘official autism’ numbers were released minutes ago by the Centers for Disease Control and Prevention, 1 in 68 among all eight-year olds evaluated in 2010, 1 in 42 boys, and 1 in 189 girls, more than a million children. The last time the CDC released these numbers in 2010 the numbers were 1 in 88, and 1 in 54 boys. Undoubtedly the real numbers today are much higher than this 4-year old data.

Along with that information, a request came to call the White House (202) 456-1111 and ask President Obama what is he going to do about it.

Special Notation should be made of the variances in the CDC report as referenced in the article Notes below (1) [3/20/13] and the information I just received. Isn’t it a hornet’s nest to figure out? In the Reference section of that report (pg.2) it states: “This prevalence estimate (1 in 50) is significantly higher than the estimate.” Somehow to me, their figures don’t seem to be coherent. Don’t they know what they are doing, or is it on purpose to add confusion to the issue?

Autism is not the only health problem since vaccines took off like greased lightning. The USA Today reported this: “More than half of children ages 8 to 14 have had a long-term health problem at some point, such as obesity, asthma, a learning disability or other ailment, a study shows.” [3]

The sad part, though, is that no one is investigating correlation and causation with regard to the inordinate number of vaccines prescribed during the first two years of life starting at birth!

In the USA alone, measles and whooping cough outbreaks occur in 90% or more of those contracting the diseases and fully vaccinated. See my blog “Mumps Breakout in Ohio May Prove Something.”

B. Even if non-vaccinated children were responsible for spreading those diseases, how come fully-vaccinated children and other vaccinees are contracting the very diseases for which they have been vaccinated IF vaccines were efficacious? Current disease-contracting statistics prove just how false the vaccine paradigm truly is! Scare tactics are employed to vaccinate, whereas vaccines fail those vaccinated! How does that make sense?

C. As an example, the charts below indicate the factual reality of vaccinated versus non-vaccinated health status of children in the first five years of life in the Netherlands (2004), one of the countries that make up the European Union. You can see on the CFR map that measles is a dot in that EU geographical location.

In the charts we see dramatic contrasts for ear infections, inflammations of the throat, aggressive behavior, convulsions/collapse, antibiotics administered, sickly, eczema, asthma/chronic lung disease, allergic reactions, and difficulty sleeping. The charts indicate that vaccinated children are twice as likely – or more – as non-vaccinated children to experience the health problems enumerated in the charts. 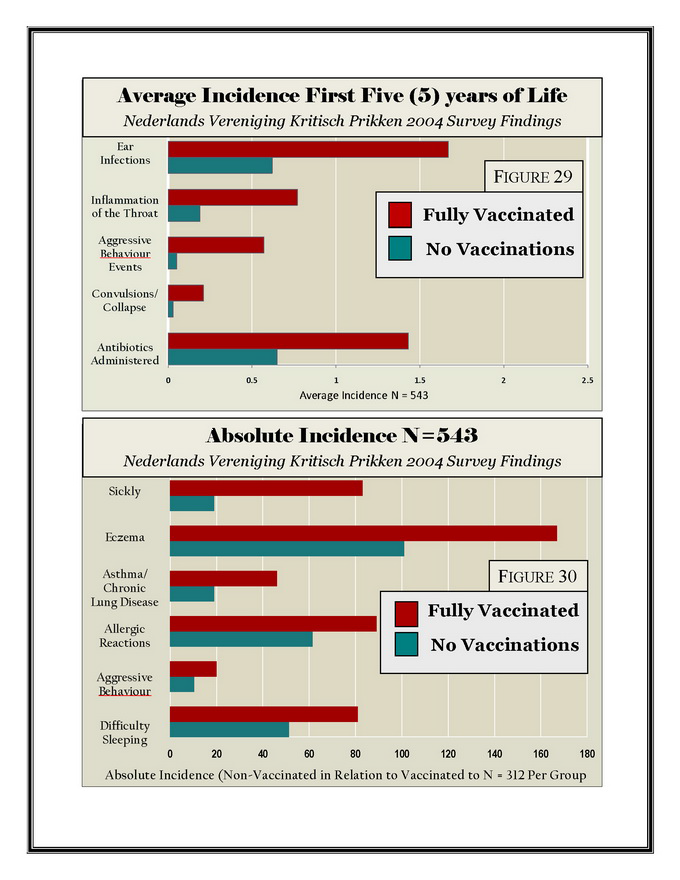 The information offered by the CFR map is rather significant and I think speaks for itself, i.e., the more vaccinated the population, the more likely to contract the very diseases for which they are vaccinated. How in the name of non-vested-interest-science are they still getting away with such sleight of pseudo-science, together with ruining the human immune system?

Just because they say so dogmatically, doesn’t mean it’s factually and scientifically so! Do your research and learn the real science behind vaccines in order to educate everyone: pediatricians, nurses, schools, health agency personnel at all levels of government, and even Congress, who I contend gave us this vaccine mess by passing The National Childhood Vaccine Injury Act (NCVIA) of 1986 (42 U.S.C. §§ 300aa-1 to 300aa-34).

The NCVIA is in desperate need of being revisited, if not repealed, in my opinion. NCVIA gives vaccine makers what some call a “get out of jail free card” that exonerates them of all liability, something no other industry has.

Furthermore, with all the health damages and problems vaccines have been causing for now going on two or three generations – see the VAERS reports in the hundreds of thousands – Congress needs to seriously investigate the autism problem, neurotoxic and other toxic vaccine ingredients, and stop taking those handsome monetary gifts from Big Pharma lobbyists that apparently influence their observable lack of oversight, I contend. In 2013, pharmaceutical manufacturers paid out $227.5 Million lobbying on behalf of their products and corporate interests. [4] What does that tell you?

Lastly, an incredible story about how pseudo-science is pulled off is reported in “Academia hoaxed by fake scientific papers auto-generated by gobbledygook text generators.”

Personally, I’d like to see shakeups at all federal and state health agencies regarding vaccinations, their ‘science’ and, most of all, their toxic ingredients. It’s long overdue.

Thank you for sharing this information, Dr. Obomsawin.

Catherine J Frompovich (website) is a retired natural nutritionist who earned advanced degrees in Nutrition and Holistic Health Sciences, Certification in Orthomolecular Theory and Practice plus Paralegal Studies. Her work has been published in national and airline magazines since the early 1980s. Catherine authored numerous books on health issues along with co-authoring papers and monographs with physicians, nurses, and holistic healthcare professionals. She has been a consumer healthcare researcher 35 years and counting.