What are neurobehavioral effects and disabilities? you may be asking. They are negative health effects that include the following: autism, attention-deficit hyperactivity disorder, dyslexia, and other cognitive impairments, which are occurring with increasing frequency, especially in U.S. children along with millions of others on a global basis.

Two physicians, Philippe Grandjean, MD, and Philip J Landrigan, MD, whose research in neurobehavioral effects was published in The Lancet Neurology [1] March 2014 issue, state that industrial chemicals injure the developing brain and are the cause of their widespread rise.

In their 2014 study, the doctors named manganese, fluoride, chlorpyrifos, dichlorodiphenyltrichloroethane, tetrachloroethylene, and the polybrominated diphenyl ethers that they added to five previous chemicals they wrote about in their 2006 paper: lead, methylmercury, polychlorinated biphenyls, arsenic, and toluene.

It’s rather profoundly ironic that fluoride, which dentistry has touted as a prophylactic dental health benefit since the 1960s, is now being demonized as contributing to neurobehavioral disabilities, especially since it’s been implicated in lower IQ test scores. [2] And, paradoxically, fluoride, a protoplasmic poison, is added to most municipal water sources in the USA. [3]

Ever since day one that fluoride was ‘supplemented’ into municipal water systems in the USA, I opposed it and did my best not to consume it – even to this day, I don’t drink it. In my practice as a consulting natural nutritionist, I always advised clients to avoid eating, drinking, or cooking with fluoridated water, plus avoiding bathing in it, as fluoride can be absorbed through the skin. Furthermore, I did not approve of fluoride drops [4] that pediatricians prescribed for children. For those convictions, I was called a “quack.”

Honestly, can readers understand just how inaccurately-skewed medical science is, if over 50 years ago fluoride was touted as a health prophylactic; mandated to be placed in municipal drinking water systems; and prescribed as a ‘nutritional supplement’ by pediatricians. And, now it’s being cited as a causative or contributing factor in autism, ADHD, dyslexia, plus other cognitive disorders to which I’d like to add Alzheimer’s, while also claiming it exacerbates other dementias. Most people are not aware there a numerous forms of dementia. See this http://www.webmd.com/brain/types-dementia?page=2 for a listing.

If that newly-documented detrimental fluoride information doesn’t tear a hole in medical science’s validity, accuracy, and transparency, perhaps, nothing will for anyone, including the medical profession, its acolytes, and apologists.

What really validates the two doctors’ research statement is the fact that more and more healthcare agencies and consumers now are recognizing that there is an inordinate number of cognitive impairments in humans, especially in the USA where children seem to take the brunt of chemical application toxicity. How? Well, let me explain.

Just about everyone in the USA has to drink fluoridated water to live. Most children are fed fluoride in water via infant formulas, in food, or as an added pediatrician-prescribed ‘supplement’. Furthermore, their pregnant mothers most likely ingested fluoridated water. Babies, in particular, get inordinate amounts of fluoride relative to their small size, weight, and inability to detoxify chemicals, including – and especially – those toxins that get injected with vaccines, thus contributing to more neurological and neurobehavioral effects.

Another fact that Drs. Grandjean and Landrigan ought to take into consideration, I feel strongly about, is how man-made petro-chemicals interact with human DNA/RNA that can cause adducts, plus the role of epigenetics, particularly since hundreds of thousands of chemicals have come into daily living in the last hundred years – and since 1994, GMO agriculture toxic chemical sprays. I talk about those issues in great detail in my 2009 book, Our Chemical Lives And The Hijacking Of Our DNA, A Probe Into What’s Probably Making Us Sick, available on Amazon.com.

Probably the most diabolical contribution of toxic chemicals harming children is one that most people revere as lifesaving and/or disease ‘prevention’ ideologies: vaccines! The laundry list of toxic and neurotoxic chemicals, plus other foreign materials [5], e.g., animal tissues, aborted fetal cell lines, mycoplasma, etc., that are inoculated into a less-than-ten-pound infant, especially within 24 hours of birth (Hepatitis B vaccine), ought to be considered nothing short of child abuse! Let’s not forget the influenza vaccines that pregnant women now are mandated to receive, which affect the fetus.

In my 2013 book, Vaccination Voodoo, What YOU Don’t Know About Vaccines, available on Amazon.com, I devote chapter 2 to both the 2011 Pink Book list of vaccine ingredients and the 2012 version, which the CDC revised apparently to appear more benign, I’d say. Unfortunately, no one in medicine is taking on vaccine chemicals as a contributing factor to children’s poor health problems. Shouldn’t they? After all, children’s health problems now are at an all-time-high rate for chronic diseases usually associated with elderly folks.

In 2010, WebMD Children’s Health published “Rise in Chronic Childhood Health Problems.” The University of Michigan Health System has a comprehensive site devoted to that problem, “Children with Chronic Conditions.”  And, Healthy Children.org devotes a website to “Coping with Chronic Illness.” No one can deny that childhood chronic diseases are on the rise.

However, I can attest to the fact that U.S. children are in serious health trouble territory, i.e., having switched from contracting communicable infectious diseases, e.g., mumps, measles, etc., which actually improved immune response and provided what is considered life-long immunity, to an unheard-of pandemic-like spate of chronic diseases, especially childhood cancers. According to the American Childhood Cancer Organization, “About one in 300 boys and one in 333 girls will develop cancer before their 20th birthday.” [6] The communicable infectious/chronic disease switch coincided, coincidentally, and parallels with, the overwhelming vaccine mandates starting in the late 1980s!

When I was a child growing up during the Second World War, I and all my little friends contracted everything that came down the pike. NO ONE DIED, and we didn’t have the medicines doctors have today; mothers used “home remedies”! Furthermore, our immune systems were strengthened as a result, and females were able to pass on to their children what’s called passive immunity. Today that ability is almost lost because most child-bearing-age females have been vaccinated and their immune systems have been damaged thereby compromising to some degree, the passing on of innate immune factors to their developing fetuses, plus in their breast milk, what’s called “passive immunity.”

What vaccinology is doing, in essence, is reprogramming the human immune system to ‘reboot’ with what is called “adaptive immunity,” “adaptive immune response,” or an antigen response.

The reasons and probable ‘need’ for booster shots or vaccinations ostensibly is this: In adaptive immunity the response is directed only to the vaccine-covered agents that initiate a response, therefore, the need to keep vaccinating and supplying booster vaccine active antigens, which also include neurotoxic and toxic manufacturing chemicals, in order to provide what’s termed ‘immunity’ for specific communicable diseases. In reality, it’s an antigen response!

Whereas, in innate immunity when not interfered with or hobbled by vaccines, a same “overall” response is provided to a wide variety of infectious agents [communicable disease microbes] that can initiate attack responses. That’s why unvaccinated children are vastly more healthy than vaccinated kids. [7]

Here’s something I think is a conundrum, which needs to be considered: Advertisements promoting the disease-contraction fear factor! All vaccination campaigns disseminate and instill a dreaded fear of contracting a communicable disease, even the common cold. However, fully-vaccinated children now are contracting numerous ‘vaccine-diseases’, especially whooping cough. Here’s proof: “Study: Whooping cough outbreak linked to vaccinated children.”  That’s not the only ‘vaccine-disease’!

Numerous outbreaks have occurred in fully-vaccinated children. Check out the following pie charts. In those contracting four communicable diseases [pertussis, measles, mumps, and chickenpox], over 90 percent were fully vaccinated. 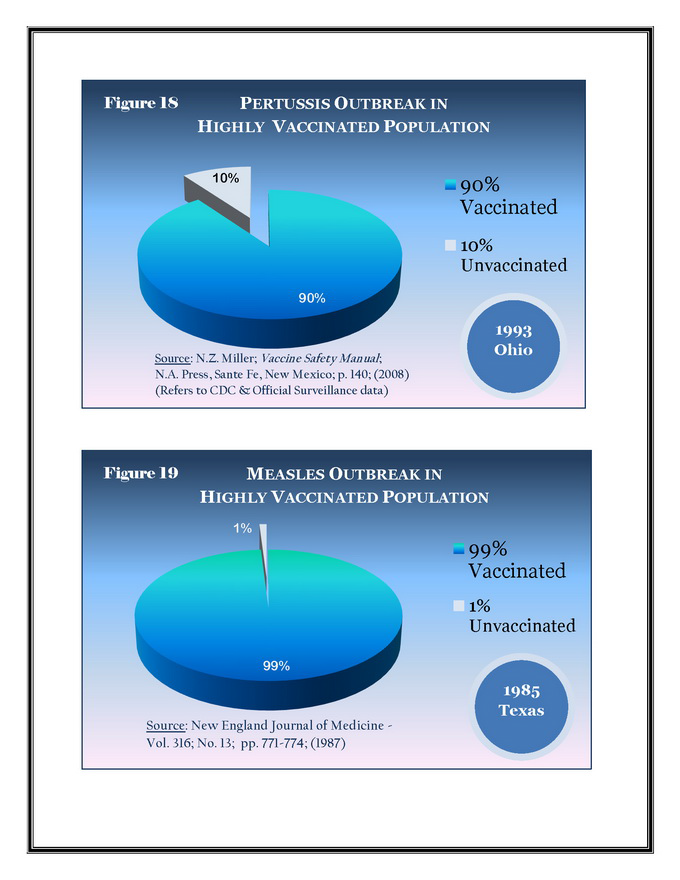 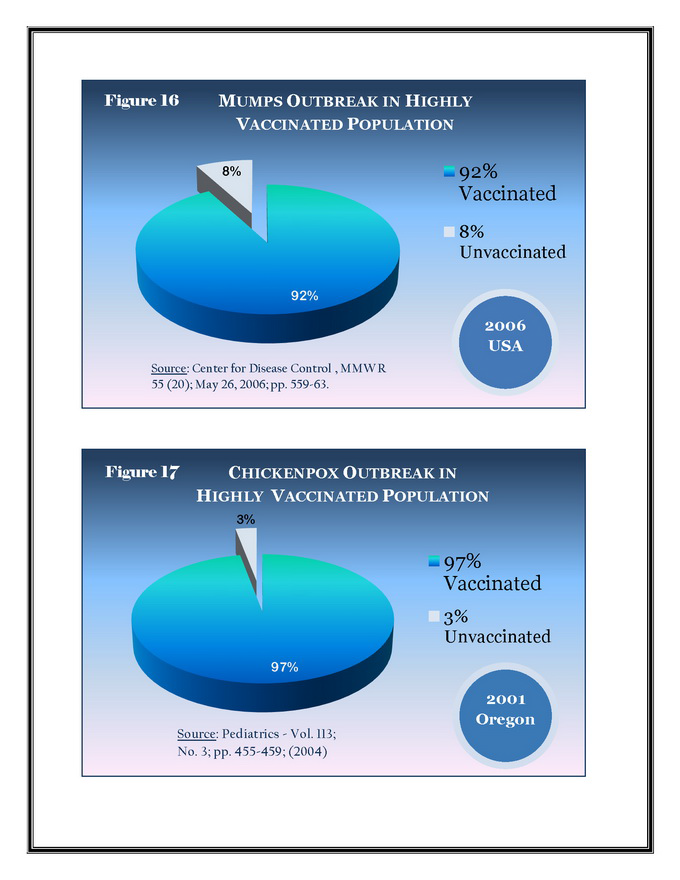 That disease-contraction trend will continue as microbes become sophisticated and morph into different strains for which there are no vaccines. All while the human immune system has been damaged and can target only organisms found within vaccine-active-supplied-antigens, which will need periodic booster shots, whereas if one has contracted a communicable disease and had proper healthcare, one attains life-long immunity!

Independent research – not necessarily Big Pharma’s – indicates neurotoxins and toxic chemicals contribute to chronic diseases and other serious health problems such as autism, cancer, multiple sclerosis, and even death. The CDC’s VAERS reporting system confirms hundreds of thousands of adverse reactions to vaccines, which damage health often permanently, and for which, except for a few, there is no financial relief for vaccinees or their parents who must foot medical bills due to vaccines gone wrong.

A classic vaccine-gone-wrong-example can be found in HPV vaccines. SaneVax, Inc. displays on its home webpage this information: HPV Vaccine VAERS Reports Up to January 2014, which includes 157 deaths, 33,311 Adverse Events, 6,653 Not Recovers, plus more frightening statistics.

Man-made and petro-chemicals are causing more problems that Drs. Grandjean and Landrigan can imagine. As far as I’m concerned, their research isn’t going fast enough for me. The only problem is: Who will listen?

Ironically, the medical paradigm that modern medicine is built upon is man-made toxic chemicals—prescription drugs, which can be patented; enjoy mega-bucks global sales; and then may be recalled because of class action lawsuits. However, there is no such legal track for vaccines. Their manufacturers were given a “get out of jail free” card by the U.S. Congress in 1986 and innocent children and their families have been paying the price ever since. Go figure!

Catherine J Frompovich (website) is a retired natural nutritionist who earned advanced degrees in Nutrition and Holistic Health Sciences, Certification in Orthomolecular Theory and Practice plus Paralegal Studies. Her work has been published in national and airline magazines since the early 1980s. Catherine authored numerous books on health issues along with co-authoring papers and monographs with physicians, nurses, and holistic healthcare professionals. She has been a consumer healthcare researcher 35 years and counting.