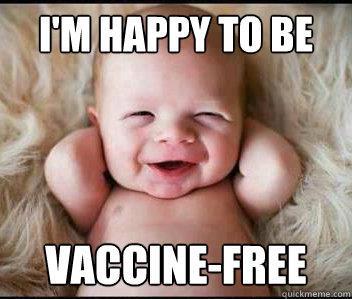 Once upon a time, in April 2009 to be exact, I was invited to give a speech at a conference on vaccination. I was to talk after two of the best speakers France has to offer on the subject had their turn, journalist Sylvie Simon and biologist Michel Georget. At hearing them speak in the past, it was absolutely clear to me that the best option is to stay as far away from vaccines as possible. I just did not know what to do instead to best assure staying alive and well.

As a paediatrician and homeopath qualified to speak on the subject, I decided to setup a conference called The Marvellous Health of Unvaccinated Children along with my friends, Sylvie and Michel. This work would later evolve into a book that analyses various life choices often made by families that do not vaccinate, including home birth, breastfeeding, simple therapies, good food (often vegetarian), a tranquil living environment and trust in the capacity of the body to heal itself.

In my life as a paediatrician, I had spent lots of time in dialogue with the parents who often needed to voice their fears about both disease and vaccines. We worked out together the best route for their children. Some chose not to vaccinate at all. Others held onto fear of disease, especially tetanus. In those cases, we postponed vaccination as much as possible and used a homeopathic protection and “cleansing” called nosode.

I worked in Switzerland where there is no real legal obligation to vaccinate, only great social pressure. In France, just a few kilometres from my office, there were four compulsory vaccinations at the time (BCG was fortunately removed in 2007, and three remain: Di Te Pol).

Some of the basis of my ability to speak on the marvellous health of unvaccinated children comes from my personal experience as a medical doctor, having collected years of feedback.

That was not enough upon which to write a book; however. As it would turn out, I found these observations were paralleled over and over again all over the world. Follow me around the planet.

In England, Michel Odent, MD showed in two studies that children having received no Pertussis vaccine had 5-6 times less asthma than those who were vaccinated for it. The first study was on 450 babies from La Leche League; the second one on 125 children in a Steiner school. (1)

Throughout Europe, a group of mostly paediatricians studied 14,893 children in Steiner schools in Austria, Germany, Holland, Sweden and Switzerland and found that children living in “anthroposophist culture” (where vaccination is largely shunned) were in better health than the controls. (2)

In Germany, one of the European Steiner schools study researchers wrote, “In the eastern part of Berlin before the fall of the wall, we saw less allergies than in the west. This population was poorer, nearer nature and less vaccinated.” Too much hygiene is not always good. As UK researcher and originator of the “hygiene hypothesis” David Strachan might say, “give us this day our daily germs”.

In Spain, Xavier Uriarte, MD and J. Manuel MarÃ­n, MD published a study in 1999 on 314 children they followed between 1975 to 2000. (3) This group of children is characterized by a majority of homebirth or natural births, prolonged breastfeeding, no vaccinations, holistic health education and no allopathic medicine. There were no serious diseases, few hospitalisations (mostly for traumas), and 3.3% asthma compared to the 20% in the general population. And of course, a lot of money was spared!

The rate of autism in the U.S. is now an unthinkable 1 in 100. Those who are unvaccinated boast numbers that run in shocking contrast to the nation’s statistics. As this article is directed to the American people, I will not go on at length here. Most of you know the work of your very own journalist Dan Olmsted showing the incredible absence of autism in the unvaccinated Amish communities of Pennsylvania and Ohio.

Further impressive is Chicago-based Homefirst Medical Clinic run by a group of doctors including medical director Mayer Eisenstein, MD, JD, MPH. They have no known autism and super-scarce allergies in their children, many of whom were home deliveries, and most of whom have had no vaccinations. In 1985, I translated to French U.S. paediatrician Robert Mendelssohn, MD’s How to Raise a Healthy Child in Spite of Your Doctor. Now I find concrete result in the marvellous health of kids whose doctors are his pupils! I like these synchronicities in my life.

In 1942, Leslie Owen Bailey, founder of the Natural Health Society of Australia, accepted guardianship of 85 children whose mothers were unable to care for them. Among these 85 children, no vaccinations were ever given, no drugs were ever taken or used, and no operations were ever performed. The only malady that occurred was when 34 of the children developed chicken pox. They were immediately put to bed and given only pure water or fresh fruit juice. They all recovered quickly without after-effects. Investigations revealed that these children whilst at school had been swapping their healthy lunches for unhealthy conventional foods, so this outbreak was not altogether surprising.

Many of these children inherited poor health due to a history of illness and malnourishment in their mothers. Despite this, and the fact that they were never breastfed nor could enjoy the normal bonding of mother to child, they were able to grow into sturdy, self-reliant children.

An interesting period in Japan was 1975-1980, when a decision was made to begin the first vaccinations at two years of age instead of at two months. The reason was that more and more was discovered linking vaccines and cot-death (SIDS). A study was published in Pediatrics showing that from 1970 to January 1975, there were 57 cases of serious vaccine reactions, including 37 deaths. From February 1975 to August 1981 there were eight cases of serious vaccine reactions, including three deaths. Unfortunately for kids and their parents, the Japanese vaccination plan is now “normalized” again. The study shows well that the immune system is stronger at two years than at two months. How well would these kids have done had they not been vaccinated at all?

We find the same observation in a Journal of Allergy and Clinical Immunology study. Of 11,531 children studied at age seven, here are the results: vaccinated at two months, 13.8% are asthmatic, vaccinated between two and four months, 10.3%, vaccinated after four months, 5.9 %. Again, how well would these kids have done had they not been vaccinated at all?

THE LESSON LEARNED ON VACCINATION

As a concerned, compassionate and considerate pediatrician, I can only arrive at one conclusion. Unvaccinated children have by far the best chance of enjoying marvelous health. Any vaccination at all works to cripple the chances of this end.